Find the Surf shops, Schools, Shapers, Spots and surfcams on the coast of Aquitaine: 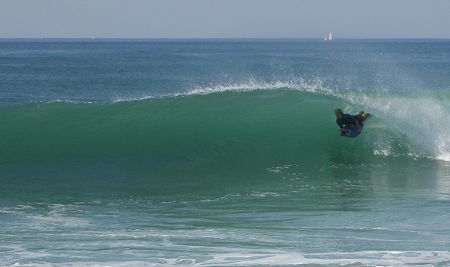 If surfing was known in Hawaii since the nineteenth century when tribal leaders proved their superiority and their temerity in riding their large wooden boards on the waves of the Pacific Ocean, it is "the Duke" Duke Kahanamoku, an Olympic champion swimming who introduced surfing and founded the Hui Nalu "Club of the Waves" in 1908 in Waikiki with Knute Cottrell and Ken Winter.
* Robert Rabagny brought the "aloha spirit" to the Basque Coast when he created and directed the "Biarritz Surf Festival" from 1993 to 2033 and invited famous guests like Joel Tudor, longboard legend or Rell Sunn "the Queen of Makaha", surfer and first woman to integrate the prestigious company of Hawaii Lifeguards.

In France it will take until 1956 to see the first surfer on the "Cote des Basques".
Peter Viertel, writer of the film "The Sun Also Rises" based on the novel by Hemingway and shot mostly in Pamplona, tried surfing at the Cote des Basques on the board brought to Biarritz by Richard Zanuck the son of Darryl Zanuck, the boss of 20th Century Fox and producer of the film.

From then on surfing became part of the lifestyle in south west France.
From the original boards in balsa surfed by local pioneers, the "tontons surfeurs", boards are now made of polyurethane or polystyrene covered with fiberglass and resin, significantly lighter and easier to handle, coated with wax to prevent slipping and with a leash for safety.
All that did not exist in the late 50s and the epic surfing, recounted in the book "Tontons surfeurs" by Alain Gardinier, retraces the history of the pioneering surfers of the time.

Nowadays surfing has been democratized, its practice is regulated, surf schools are legion, and if at the end of the 70s you had to wait for someone to surf with, now, even at dawn, the "spots" are packed ....