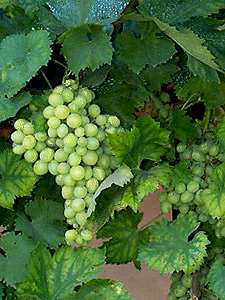 Armagnac, or rather the counts of Armagnac, the Albrets, were an important political force in France in the 14th, 15th & 16th Centuries, they created a political party opposed to the absolute power of the Monarchy and were responsible for the introduction of Protestantism into the South West of France. It was during their rule of Armagnac and Bearn that the local 'Eau-de-Vie' began to be commercialised and sold in the rest of France as 'Armagnac'.

The invention of the drink is attributed to Arnaud de Villeneuve (now Villeneuve-de-Marsan in the Armagnac producing region of Chalosse), an alchemist who died in 1311. The production of Armagnac involves the ageing of the drink in oak barrels, anywhere between 4 and 20 years. The length of the ageing process dictates the colour and strength of the Armagnac - older Armagnac is more amber-coloured and less alcoholic (loosing 1 degree every 3 years).

Armagnac can now only be produced from one of 11 specified strains of grape, cultivated over an area that covers the departements of the Gers, Landes and Lot-et-Garonne, centred around Aire sur L'Adour and Eauze. The Armagnac (drink) is a major export of France, with more than half the number of bottles produced annually going abroad (Japan, Great Britain, Germany and the USA being the major importers).