Historically, the Duchy of Gascony extended across the South West of France in the form of a square, from the river Garonne (and Toulouse), down to the Pyrenees, across to the Atlantic Ocean and up as far as Bordeaux and the river Gironde, but excluding the counties of Bearn and the Pays Basque (Pyrenees Atlantiques Departement). (Approximately the Departements of the Gironde (33), Lot et Garonne (47), Haute Garonne (31), Gers (32), Haute Pyrenees (65) and Landes (40) as they are today).

Vassal to the French crown since the conquest of Clovis in the 5th Century, Gascony only briefly flirted with independence in the 8th Century when Duke Gaifre attempted to form a separate Gascon state.

A century after Gaifre's rebellion was crushed, the Duchy of Gascony was split into separate counties (including Chalosse, Armagnac, Comminges and Bigorre) only for the Duchy to be reformed when the English Royal family held possession of the territory from 1154 to 1450 after the marriage of "Alienor of Aquitaine" to Henry Plantagenet of England. One of the results of the English occupation was the increased production of the Bordeaux wines, a form of agriculture that had only originally been introduced by the Romans and for the same reason - export to the mother country.

After 1450 the east of Gascony, now part of Guyenne, was under the control of the Armagnacs. But the Armagnacs political quarrels with other French nobility lead to the mysterious deaths of two Counts and, in 1473, Armagnac was confiscated by Louis XI of France thus becoming a crown province. The General Estates of Auch were created in 1716, identifying Gascony as the area currently known as Gers with Auch as its capital.

The locality of Gascony as it is known today is the Eastern Gers (area of the Gers not included in Armagnac), which is separated from the Pyrenees by Comminges and Bigorre, the scenery is more that of rolling hills and glacier formed flat valleys. Yet there are views of the Pyrenees from the southern hills. The towns and villages of Gascony tend to be small and far apart and the local economy is mainly agricultural - cereals, cattle, and of course, ducks and geese for the famous Gascony preserves, pâtés and particularly foie gras but this also applies to the Chalosse which is also part of the original Gascony. 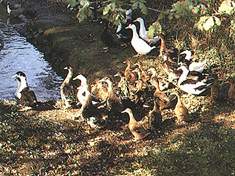 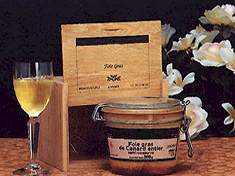